Bess Parker is only 21 years old when she sets out by herself in 1908, leaving the safety of her childhood home for southwestern North Dakota to establish a homestead. And it takes all the strength she can muster to succeed—facing the perils of the vast prairie, making her homestead productive, conquering the dangers of the frontier, flirting with romance, struggling with the emotional needs of her heart and body, and meeting the challenges of life on the prairie. But this unique young woman has a steely determination, and her story is the epitome of courage and grit in a difficult and sometimes cruel time in the history of the west. 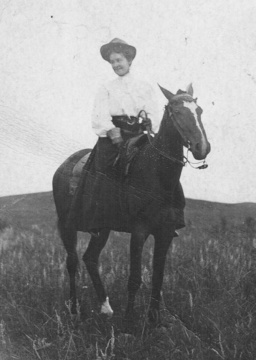 Bess Parker awoke to the sound of meadowlarks. The morning was crisp and clear just south of the North Dakota and South Dakota state line, with a few clouds in the crystal-blue sky like puffs of cotton on their journey to the east. The scent of wet green hay wafted through the window, tickling her senses. I made it, she thought, as she got out of bed and quickly dressed. She put on her slippers and walked swiftly across the rough-hewn pine floor toward the front door. She headed outside to finally stand in front of her newly built sod house. She raised her arms and puffed out her chest to greet the new day. She smiled.

A fresh, cool breeze blew through Bess’s hair as she surveyed the green waving prairie grass in all directions and the Teepee Buttes about five miles directly west. A mile to the north, the winding Grand River flowed silently through the little town of Haley, North Dakota.  It was as she had expected all along.  It was what she had dreamed about—had longed for–and seemed to be a just reward for doing so much studying and planning. This is my land, she thought, my new home. My homestead.

As a 21-year-old single female, Bess had joined ranks with the few women who had taken advantage of the Homestead Act of 1862. This act, signed into law by President Abraham Lincoln, provided that anyone who had never taken up arms against the United States government (including freed slaves and women), and who was twenty-one years or older, a US resident, or the head of a family, could file an application to claim a federal land grant. This grant provided 160 acres of free land that the successful homesteader had to “prove up” over a five-year period to obtain title. Bess had successfully obtained her grant from the agent in Lemmon, South Dakota and was at the beginning of the five-year “prove-up” period. After five years, she would have to offer proof that she had lived on the land and provide evidence that she had made the kind of improvements that would make the land productive and sustainable for a person trying to earn a living. If that were done, the land would be hers free and clear.

Bess reflected on her accomplishments over the past couple of months but knew full well that her adventures were only beginning. It didn’t sound very exciting on the face of it—sleeping in a house made of grass and dirt, and dug into the side of a small hill on the vast prairie, but it was all hers. More than that, the future would belong entirely to her. It would be a new life—a challenge for anyone, and especially for a woman alone. The thought of it made her breathless.

Now, as she stood outside her home, a feeling of pride and accomplishment swept through her, and she couldn’t help but smile. This was it—her home—and to top it all off, she was in love. She had faced a challenge at a young age and had met it successfully head on, but Bess was no fool. She knew that many more challenges loomed in her future–challenges that she welcomed.  It was exhilarating. Thrilling.

She stood silently and enjoyed the cool breeze, the pleasant sound of the wind blowing across the waving grass—like a heavenly whisper–and the happy birds. She closed her eyes and listened to those sounds that, together, were symphonic and seemed to transport her back in time—four years ago—to the only home she’d ever known . . . Cando, North Dakota.